(LANSING, MI)  The Tri-County Bicycle Association (TCBA), sponsor of Michigan’s annual epic end-of-summer bicycle camping tour – the DALMAC – tasked Future Media Corporation to bring new life to its website in preparations for the 49th (2019), and the 50th anniversary year event, dubbed DALMAC GOLD.  Working within the outdated theme, we stretched the limits of its format, adding many photos and videos that demonstrate the fun and excitement of DALMAC, pared unneeded verbiage and inefficient use of space, streamlined navigation, fixed compatibility with current personal communication devices, and continued customization tweaks for a month past the event.  Due primarily to enhanced social media presence and marketing, DALMAC received more applications than ever before and had to hold over registration to accommodate them all.

The DALMAC features multiple routes that wend their ways northward through Michigan’s scenic countryside and quaint small towns.  The ride culminates in a fun finish in Mackinaw City and coveted group photos on Lk. Huron’s northern shore in front of the magnificent Mackinac Bridge.

DALMAC (Dick Allen Lansing to MACkinaw) originated in 1971 when former State Representative Dick Allen challenged his colleagues and constituents with a bicycle ride from the State Capitol all the way to the Big Mac to demonstrate that bikes and cars could safely share Michigan roads. Since 1975 DALMAC’s success has allowed the DALMAC Fund to grant over $1.5 Million to a variety of bicycling activities in Michigan ranging from safety and education programs to bicycle trail development. 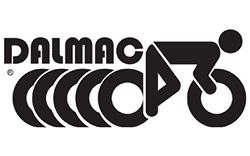 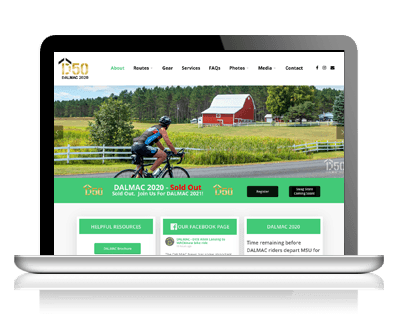